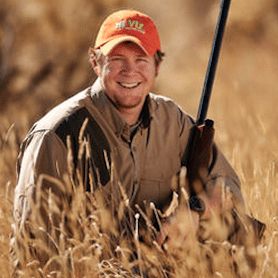 Allen Treadwell grew up in the Missouri Ozarks where hunting and fishing is the chosen lifestyle for most residents of the area, especially the Treadwell's. Following in the footsteps of both his parents and grandparents, Allen literally cut his teeth on shotgun shells and trotlines. Naturally, Allen soon progressed from the tag-a-long kid to the one pulling the trigger. It soon became apparent he was something of a child shooting prodigy. As an early teen, Allen began competing, and winning, locally in all kinds of shooting matches including archery, centerfire rifle, muzzleloader, and shotgun. Although skillful in every discipline, his shot gunning talent soon outpaced the others.

Allen's competitive spirit grew, and his winning streaks broadened. He earned a spot on the All-American team in Sporting Clays, achieving the master class level (the highest class possible) at 16-years of age. At that point he was invited to try out for the Jr. Olympic Team. Allen's success in International Skeet is nothing short of phenomenal with a 3-time National record holder, 3-time World Championship Team member, 10-time World Cup team member, and the 2004 Olympic Team alternate. This laid-back country boy literally shot his way around the world. He broke clays in China, Germany, Italy, Egypt, Finland, Croatia, Australia, Spain, Brazil, the Dominican Republic in addition to hundreds of ranges in North America.

The traveling and winning were certainly a dream come true, but Allen began to yearn for the woods and waters of his roots. Bass Pro Shops had been a sponsor of Allen's competitive shooting tours and he hoped that relationship would somehow continue past his choice to leave the shooting circuit. In 2003, Allen was invited to join the prestigious Bass Pro Shop, Redhead Pro Hunting Team. Since that time, he has been a co-host of the 100% Real Hunting and Bass Pro King of Buck show on The Outdoor Channel. Allen has proven himself in the hunting world just as he did in the shooting world. For the past several years he has co-hosted the Winchester Whitetail Revolution program on Verses and can be seen regularly on Hunters Specialties, Primetime Bucks and their “Cuttin & Struttin” DVD's and Newly Winchester Rack Masters on the Outdoor Channel.

It is no wonder that some of the top names in the outdoor industry have chosen Allen Treadwell to endorse and represent their products. His sponsors include: Bass Pro Shops, Cabela’s, Winchester Ammunition, Winchester Firearms, HIVIZ Sights, and Connecticut Valley Arms. Allen continues to reside near his childhood home, with his wife Lexa, and daughter Bremi where hunting and fishing are his chosen lifestyle.