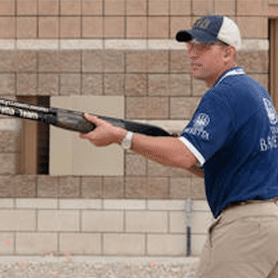 Travis Mears has been going to the gun club since he was a baby in a walker. His dad, Lonnie, would tie his walker to a pole and let him go in circles while dad shot a round of skeet. At age 9 he began shooting, and has made it one of his life passions. He was one of the founding members of the State and National Champion Johnson County 4-H Shotgun team. At age 17 Travis won the gold medal at the ESPN Great Outdoor Games. With an incredible display of focus, Travis was able to emerge victorious in a field that included some of the best clay target aficionados in the world. He enjoys the outdoors, and is an avid hunter.

Travis is a scholarship shotgun sports athlete at Lindenwood University in St Charles. Missouri, and is the captain their multi-time National Championship Collegiate team. Travis was a high school member of the National Honor Society and was voted most talented by his Senior Class at Burleson High School.

In addition to his college attendance, Travis’ love of the shotgun sports has led him to the art of shotgun exhibition shooting. The mix of entertainment and marksmanship is a great way for Travis to share his love of the sport with many people around the country.

He is also giving back to the shooting sports by coaching other youth and adults, and by talking to youth at various schools and clubs about being successful. He has acted as a coach during the last four years in the well-known Champs Camp program. Twenty plus alumni of this program have achieved All American status.